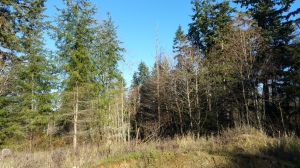 I have the privilege of experiencing the forest around me go through the four seasons. This frosty morning in late November I experience “Quiet Beauty.” The deciduous trees have now shed their leaves.

It is so quiet. It is peaceful.

The sun is up but some frost remains. Lichen is visible on some of the trees.

Mushrooms grow on a stump in the shade. 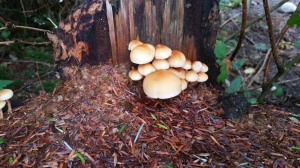 The evergreen trees stand tall and majestic, the same through all seasons. They know how to live in the now.

On my flight from Washington to California I saw a magnificent sunset over the Pacific Ocean! 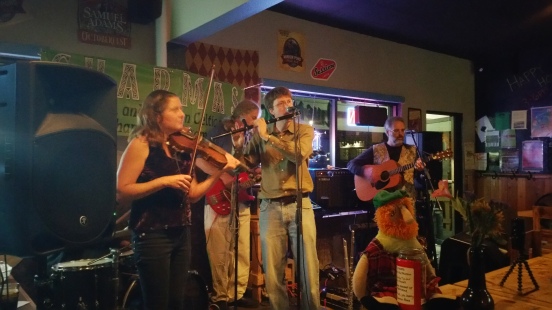 I had so much fun listening to my oldest son, Aaron, performing with his Celtic Music band called “Charmas.” My son is the tall handsome guy in the middle playing the wooden flute. 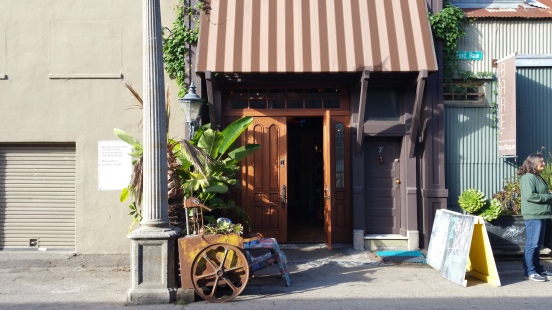 I had a nice weekend visit with my Mom and step-dad in Santa Cruz. My Mom let me borrow her car and on Saturday morning I found this very interesting building where the workshop was being held. It was decorated with art and inventions from the past.

First we introduced ourselves.  There were so many people attending the workshop this took about 2 hours. Most of us were beginner builders, but 4 attendees were construction contractors who came to learn more about Tiny House building.

First we heard from Jay Shafer, the author of “The Small House Book” that some believe was the beginning of the Tiny House Movement. Jay explained that a “Tiny House” is any house in which ALL the space is used well. It is an EFFICIENT HOUSE. He told us about building codes and minimum house size regulations.

Then we heard from Daniel Bell of Danielbellconstruction.com. He taught us about many things including safety, tools, trailers, foundations, framing, insulation, roofing, composting toilets, electrical and plumbing. In addition to a Power Point presentation on all topics, Daniel had a lot of cool models and samples of everything that he showed us. I learned a lot, and I finally understood off-grid and grid-tied solar power systems. Daniel said with a grid-tied system if you generate more power than you need, you can sell it to the power company. But it is not quite as great as it sounds since the power company buys the electricity from you wholesale, and sells it to you at retail. 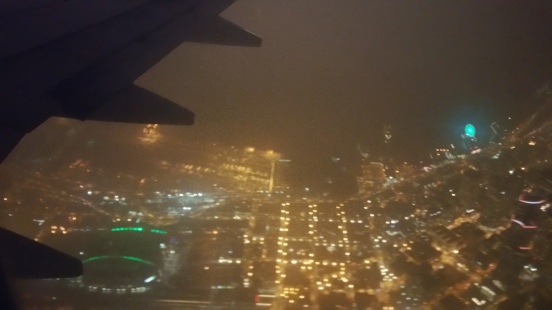 It was nice to land safely at the airport in Seattle and go home to my Tiny House and children and dogs. It was a great 4 day weekend! 🙂 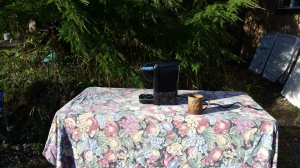 Happy Day! I am making HOT coffee in the sunshine in my new mini-coffee maker plugged into my temporary power pole! They hooked up our power yesterday! After 2 months of flash lights and propane heaters, we are getting electricity in the Tiny House and travel trailer! FUN!

Here is an electric light inside my Tiny House! Whoo, hoo!

Here are some photos of them putting in our electric service yesterday. 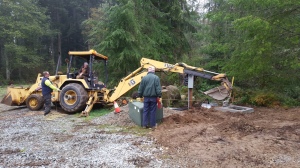 I still need to write about my travels to California for the Tiny House Workshop, but the HOT coffee report was so exciting, it had to be told now!

Princess with her newborn puppies in 2012

The forest is a beautiful and dangerous place. My little girl dog “Princess” went out to go potty, and never came back. She had been doing really well being off leash around my campsite area. I would let her out of my Tiny House so she could go potty outside. She would always come back and scratch on the door and I would let her back in. But it was just getting dark when I let her out for the last potty stop of the day. I think she decided to go for a run this time instead of coming right back. There was a lot of coyote howling and barking in the woods that night. We don’t know what happened to my sweet doggie, but she never came home. She was a domesticated pet dog with no sense of what things were dangerous. I called every Vet office and animal shelter in the area, but no one brought my dog in. I know for a fact that if she was alive she would come home to me. Princess was my sweet baby for 7 years.

Here is one of her darling puppies: